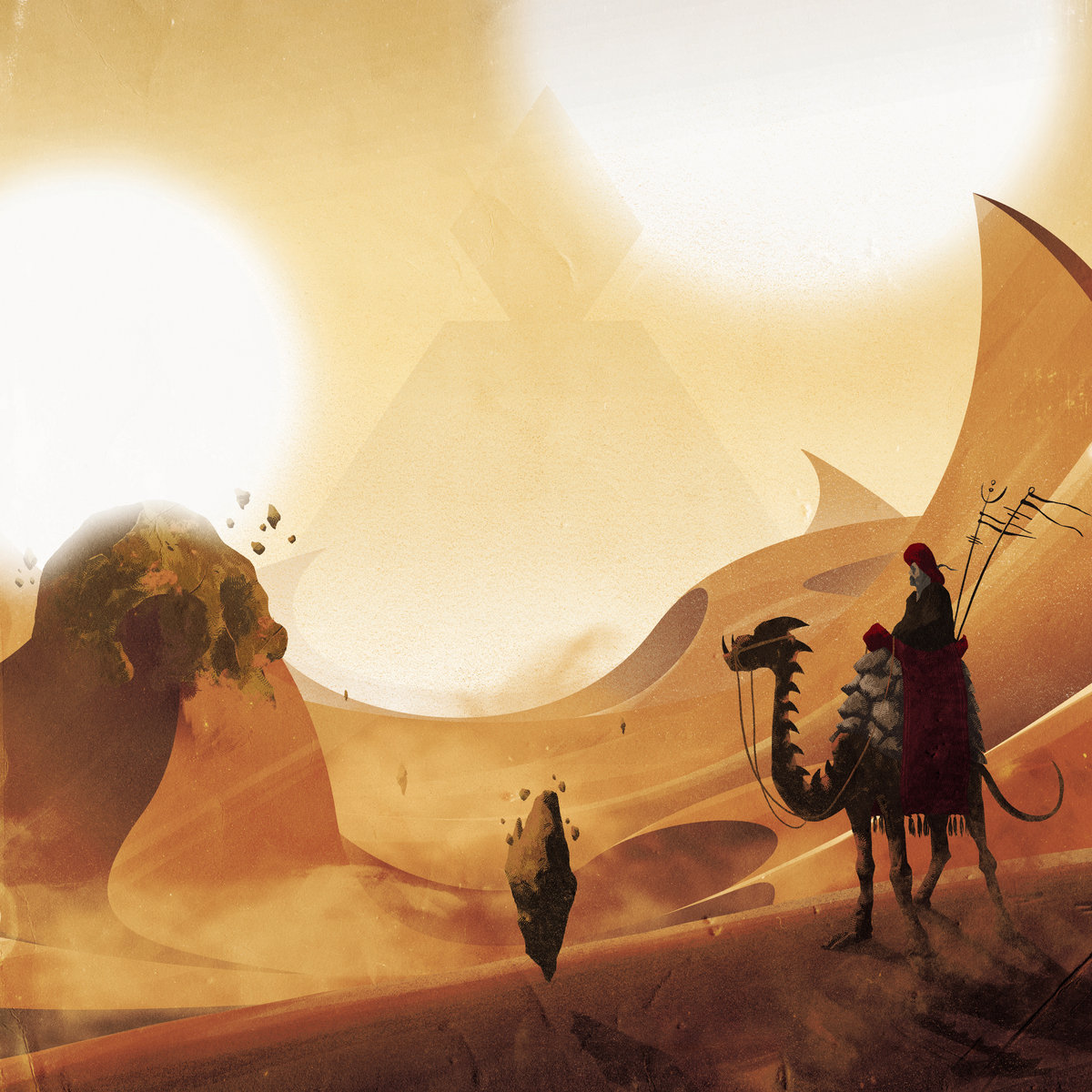 When I was a kid, I used to listen to a lot of metal. When I say "a lot", I mean that's all I listened to. When 90s death metal and black metal first hit the scene, I was able to get everything I needed just by looking at the album cover (and quite often, the band logo). This pretty much has always been the case. But then there were those visionary bands that did away with convention, in their music AND their cover art. When you look at those Arik Roper, Roger Dean, Dan Seagrave, Michael Whelan, or Dave Patchett covers... you know the ones: The ones that take you places. You could sit there for the entire length of the album while staring at the cover, allowing it to whisk you away into some faraway land. Each song is a new adventure, new place, or stone turned in that land. Something about these covers makes the music contained within all the more vital to the whole experience. 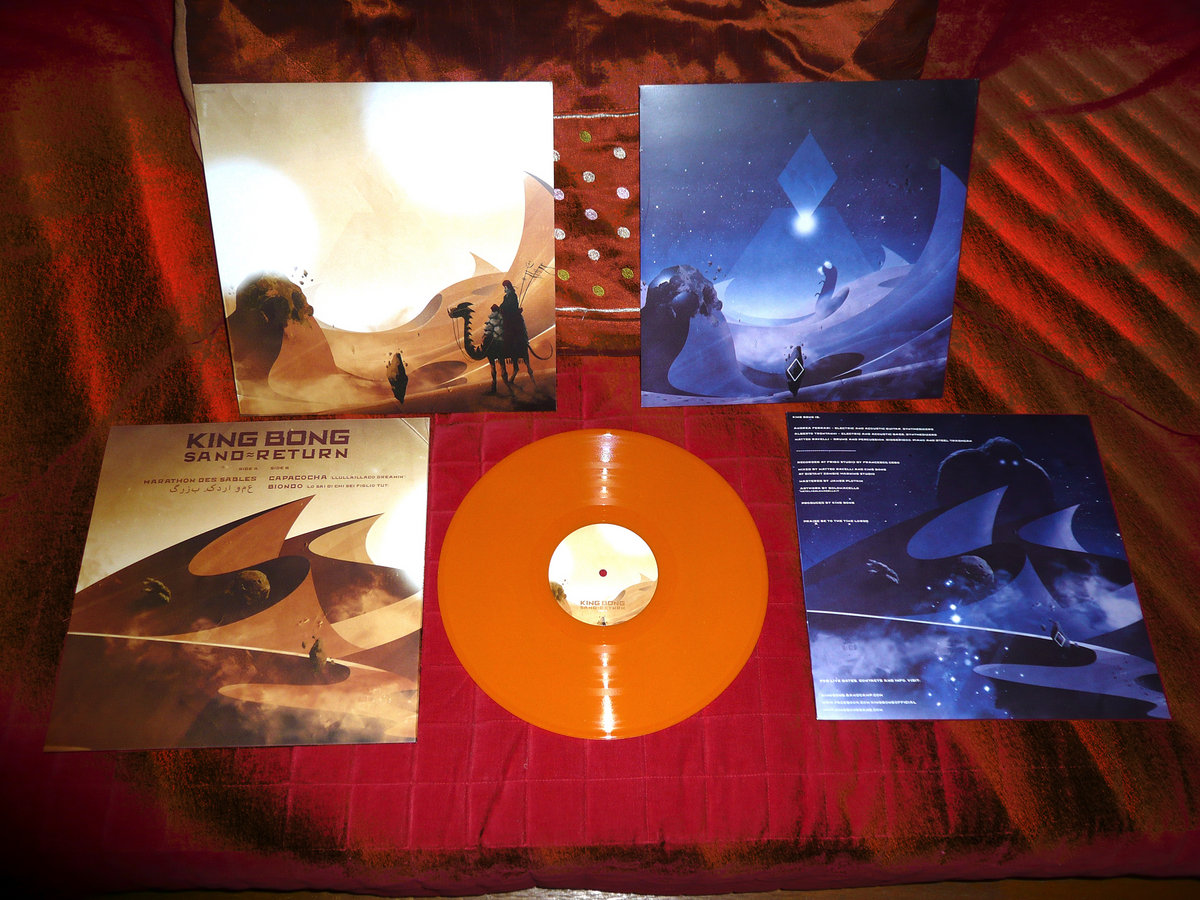 King Bong is one of those bands that got me on the cover alone. A band that defies category by simply playing music. Sure, I heard their previous albums "Alice In Stonerland" and "Rivolta Dada", among others. Each album of theirs is a different journey, that's for sure. They are the psych/stoner/jam/avant garde masters. But this album has something just a little different happening. One thing you will notice in particular is that these songs feel like crafted songs. Their previous albums have great pieces of musical work, but have an obvious "jam it live" feel to them. "Sand ≈ Return" makes a few minor changes, and uses some studio trickery to seal the deal.

I never could get past their name before listening. I mean: "King Bong". That's a tough shirt to wear to your mother-in-law's house. If there is anything we need to learn from all of this, it's to never judge a band by their name, in the same way we don't judge a book by its cover. There's only one problem with this: King Bong, a band that should not be judged by their name, made an album that CAN be judged by its cover.

I like a few video games, but I'm certainly no gamer. I spend exactly two hours a year playing games. I like the ones that really draw you into the world around you rather than the shoot-em-up soap operas. Shadow Of The Colossus has that feel to it. Another game called Journey has a similar feel, but the landscape and the overall "vibe" of the game is quite different than what one would expect from the usual hack-n-slash. In Journey, you are in a desolate, desert world, seeking a resolve in your lonely travels. Each area leads you one step closer to an answer as to what the hell you are even supposed to be doing. Every moment, and every occurrence in the land has a mystical quality that binds you to the adventure.

The same could be said about King Bong's latest album: "Sand ≈ Return". There is something foreboding and dark behind the fantastic artwork.
One look at the cover, and I was done for. It looks like something out of the game Journey. It truly appears that the artist (who has other covers and art out there... it's all really incredible) may have been influenced by the game... but possibly not. Sand dunes, eroded and shaped by time and wind, all within a very alien landscape. The colors within and without the album sleeves are all selected for the feeling they instill, rather than a flaccid attempt to look "psych-y" with stars and androgynous twins and moons and other overused subjects. It looks like the artist checked out of reality for short time while the colors were being laid. That being said, the music contained within is a mirror image of the outer presentation. You are hearing the story while looking into it.

The band brings the stoner/psych from Milano, Italy. They appear from out of a tumultuous sandstorm, bearing gifts of herbs and spices. The music contained within is a perfect match for the cover art. Imagine being swept into a mystical desert land just to find that your only way out is to connect melodic passages with fuzzy guitar riffs and rhythmic grooving. By keeping one's self hydrated properly, and well-imbued with sacred incense, the album becomes an adventure... a "Journey", if you will. Four songs that drive the caravan forward towards the next oasis.
"Marathon des Sables" begins with some Middle-Eastern-ish rhythms over breathy jazz chords and tickly noodling. The entire song begins to roll a huge stone uphill with ease. The heavier it gets, the easier it seems to roll. It reaches its apex and the stone transforms into a bird called عمو اردکِ بزرگ
This apparently means "Uncle Great Duck" in Persian, but I only used Google, and that never counts for anything worthwhile. It really treats you to a complete meal of psych, jazz, and stoner. By this time, you'll be thinking "jazzy" thoughts, and realizing that this band is, at their absolute best, an avant garde, psychedelic jazz project (with some super stonery moments). 5 minutes in, the guitar somehow transforms into this Chick Corea/Zappa-meets-shredder kind of thing. And then the journey becomes a wild ride, galloping after a strange, huge bird, flapping away into the distance. "Capacocha (Llullaillaco Dreamin')" follows quickly behind its predecessor with a huge scoop of Mr. Bungle-esque lollygagging, which makes my life that much more awesome having heard something like it.
The 17-and-a-half minute epic "Biondo (Lo Sai Di Chi Sei Figlio Tu?)" completes the LP with even more greatness in the same manner at which this entire album is presented. I've said it before: Avant Garde Psych Stoner Jazz.
King Bong were a huge Bandcamp surprise for me. Fine, fine psych, unfettered from the standard menu. Four courses, complete with an herbal sachet to use as you see fit. No matter what order you consume them in, or how much you consume, it's likely you'll be right back on the chowline when it's over. Dreamy, drizzled, and decadent helpings of gourmet psych rock cuisine.
Incidentally, due to the aforementioned album cover, and its likeness to a familiar game, I decided to play the game while listening to the album. To my total astonishment, it all fit into place like it was supposed to be there. Maybe it's like the old "Dark Side Of The Moon/Wizard Of Oz" thing, messing with people's heads, but it worked for me.

Check 'Em Out On Bandcamp
Book Their Faces
Posted by Nerve Salad at 4:40 PM No comments: