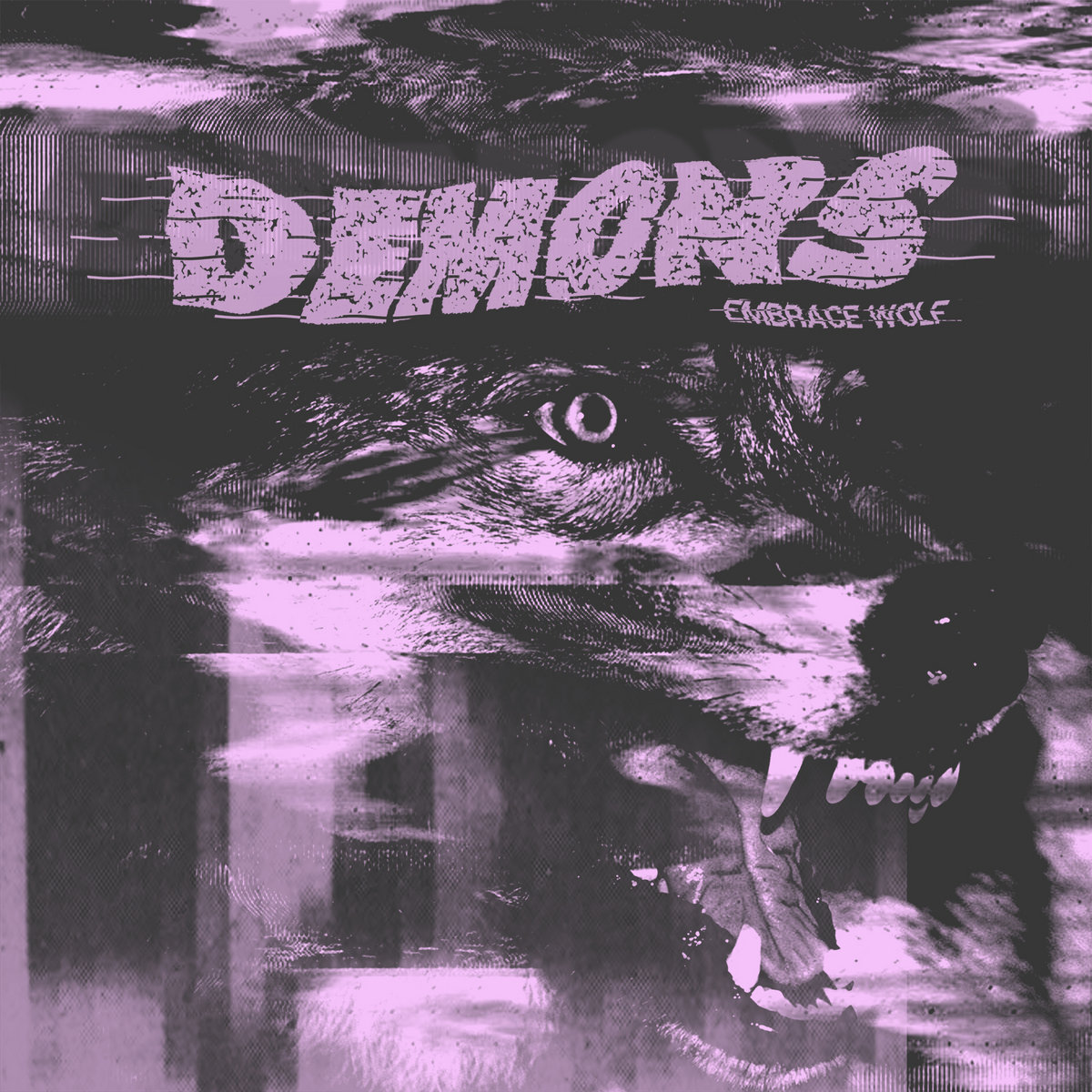 Reviewing the latest offering from Norfolk, VA's Demons becomes an exercise in adjectives and synonyms for the words: Pummeling. Punishing. Brazen. Crushing.
To start this off properly, let's just say that Demons released an EP (with Spartan Records) that goes by the name of The Great Dismal. I liked it, okay? It was SUPER good. I mean, it had a lot of things going on trapped within a space of just six songs. Lots of influences would poke their heads out and sniff the air a little, only to retreat back into their cozy little holes. The whole thing was worth repeat listens just because of all the little bits and pieces you could lasso from it. I knew the band was still gravitating toward a sound they had already conquered, but didn't quite know the scope of their ascension.

Embrace Wolf comes out of nowhere, making mincemeat out of your face. It has this crazy old school post hardcore feel to it, but swings a nail bat full of noise rock screeching. Like AmRep and Touch And Go bands getting into a gang fight, but then agreeing to make noises in the night.
The album starts with the instrumental (telebrothy), setting the pace for the roller coaster we're about to get on.
"Always Your Own" grabs you by the collar and shakes you around with some heavy down-tuned riffs and a sneering hardcore attitude. I'm feeling the effects of fingers pointed as hard as they can.
"wish" kicks in with some drums played in your backyard.  Mid-paced, laced with darkness and a finger pointed so hard, it makes your own hand hurt.
"Nobody Loves You The Way You Are" makes me feel like I'm in the early days of "post-hardcore", "noise rock"... like I said: AmRep/Touch And Go feelies. The guitar pierces through the veil of sound like a syringe full of early '90s. This is not to say they are derivative... not in the slightest. These tunes are fresh and clean. They feel like songs you needed to hear NOW.
"Dig" clocks you in the jaw with a slow-cooker full of meanness. The howled vocals induce gooseflesh, while making you want to cower in a corner. Unconventional, twisty-turny riffs churn away in search of the next skull for trepanation.
"Decibel Farmer" knows who you are, and it knows where you live. And it also knows how hard it can point the finger, and exactly who it's pointing at. It also gives us our first breath of air after being manhandled throughout the entirety of Side A. We're treated to an interlude, of sorts. But it does not last long.
"17:9" hits hard, fast, and leaves you with finger holes in your face.
"Arranged Marriage" is the most "melodic" of the bunch. But it still has that twisty-riff grime that just won't wash off.
"Assured Retribution"... careful with those riffs, guys. This one makes the whole album. Back when I was hearing snippets of Embrace Wolf in-studio (via FB posts), this riff showed up and reared its head long before I heard the album. I wasn't prepared for that clock-cleaning. So... I dub this one the Nerve Salad personal favorite track from the LP.

Embrace Wolf is a brutal beatdown, but still gives you back the "oomph" to pick yourself up and wipe your bloody nose. You walk away a little wiser, a little tougher, and ready for the next time some band cold-cocks you when you're not looking.

My grandmother always told me not to make faces because it will "stick like that".  I made a few mean faces & scowls while listening to this album, but I think I was so happy to hear it, they never stuck that way. I love you Grandma, but I'm not so sure you were right about that.

I tend to forget to take vitamins. It's not like I intentionally do it. I just get going so fast in the AM, that the very idea of having to take them just escapes me. Those days that I don't forget, I notice something different. Like an overlapping bounciness, or a milder reaction to the events of the day. You can get by with NOT taking them, but there is a definite difference in your world when you DO.

Akron, Ohio's Relaxer has that effect on me. There is some kind of crazy difference in the world when they show up. I would have survived without hearing it, but now I'm not so sure. Since I first had a dose, I think it's going to be a part of my regimen.

This is indie/stoner/prog. I don't know any other way to describe it, and the last thing I want to do to any band is compare them to some other band. The best thing to do for any situation is just listen. Members of Relaxer are/have been members of other known bands (The Party of Helicopters, White Pines, Teeth of the Hydra, Sofa King Killer, Royal Bangs , etc.), and if you do some research, you will find that these other bands don't have much to do with Relaxer. I notice that Relaxer can be crazy to listen to sometimes. These are busy dudes. The music is hugely spastic, and the guitars rip around like a buzzsaw. Synth blasts roll in from Planet X, and the prog arrangement ensures your compliance.

I'm finding Unreal/Cities to be a stellar album. It's music that I would not have heard had I not fallen into the rabbit hole. Thankfully I fell right on top of one of my favorite surprise albums of 2017.

Relaxer have another album as well (Lasers), which has a slightly more chilled-out element to it. They came back with a  more anxiety-driven blaster of an album that feels like it ends as fast as it begins, at which point you're catching your breath while you pick out your favorite parts.

Get A Book On Faces 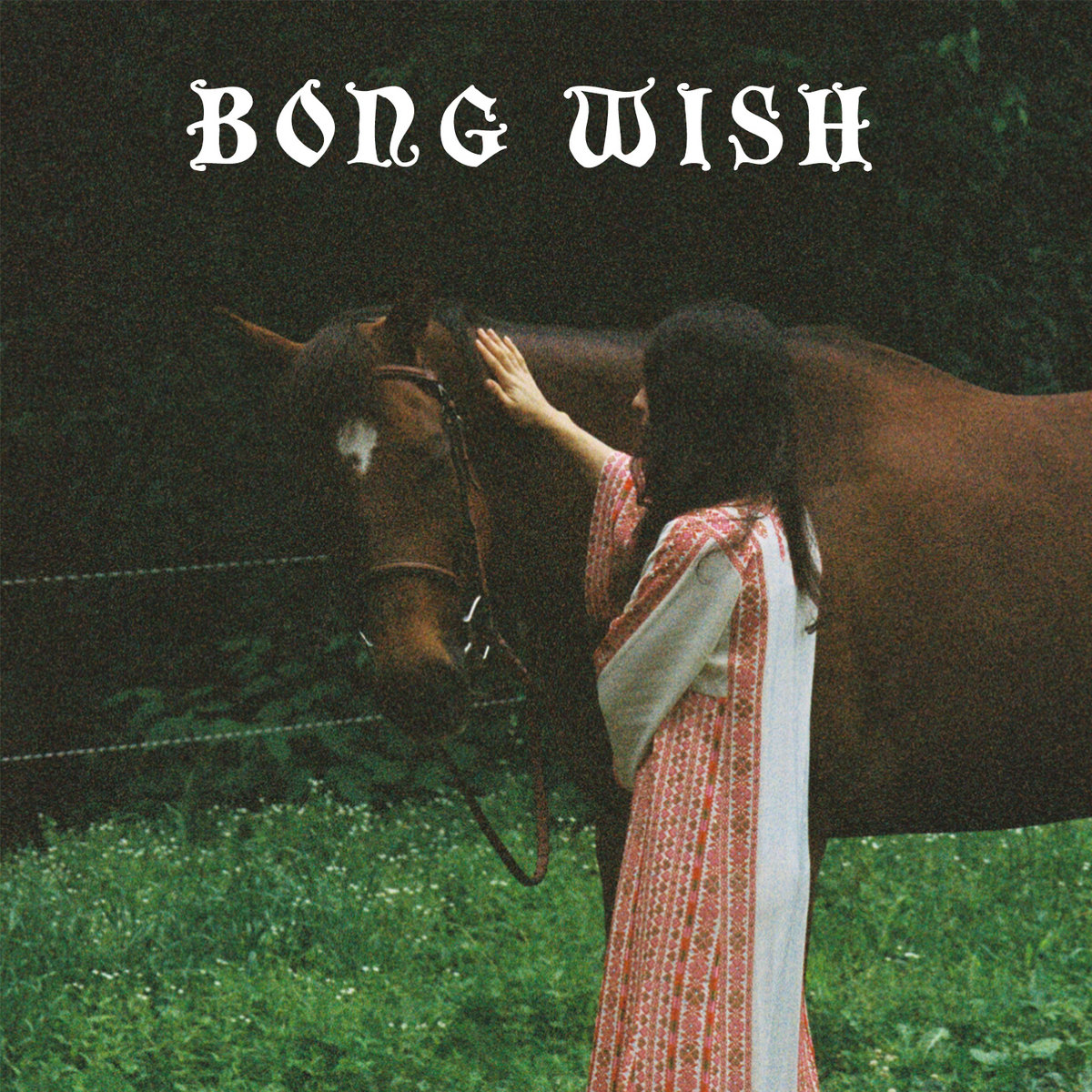 I'm late to the Beyond Beyond Is Beyond Records party. A label that puts out releases that defy most genres, but shares a wonderful solidarity with all things psychedelic.
One of their latest offerings is a 4-song cassette from Boston, Massachusetts' Bong Wish

Incense and peppermints cloak the aura of this EP. Music that sounds as though it was recorded in an era that never existed. Bandleader Mariam Saleh has a voice that brings to mind Renaissance's Annie Haslam, Grace Slick, Vashti Bunyan, etc.

When we start talking about psychedelic folk, we can go on and on about the "who's who" and the "what's what" of bands and artists. Some groups of yore had a more defined sound like the minstrel-y lilts of Mellow Candle, or the more rock-influenced flair of the aforementioned Renaissance.
And while I mention these groups for their vocalists, they really have little to do with this indecipherable musical sphere called Bong Wish.

We start with "My Luv", a song that appears to be about a beloved pet (and, unless I can't hear lyrics correctly, hypnotist Karen Hand?). Could be a miniature dragon, could be a bearded dragon. Might be a Siamese cat named Latka.
"Saturn Spells" calls forth the psych folk ghosts of yesteryear. A tune on the darker side of things. Perhaps the darker side of some undiscovered galaxy with some other Saturn that we have not named yet. Flutes flit around like cosmic butterflies, guitars jangle from atop a distant stone slab, on a distant mountain, in a distant purple marshmallow cosmos.
The third song "Conversation With Business People" has a free vibe that continues for the length of the track. A '70s New Wave experiment in grooves turned into a PSA about the virtues of living freely as an extroverted introvert (it's a thing).
"In The Sun" completes the trip with an orchestral lullaby.

Each of these tunes is its own entity. It will be interesting to see what a whole album will be like. Meanwhile, these four songs are intoxicating enough to be listened to many times over. The EP, as a whole, has a cumulative effect on the mind. At first listen, this will befuddle and confuse you, but you will be drawn further into the swirly cosmic headspace with each listen. Multi-instrumental psych with a "trippy" assertion, closing in on you like a unexpectedly warm and snuggly, yet unpredictable, viper.

Bong Wish, with four songs, might very well turn the tides on the psych folk coterie. Looking forward to more of these hallucinatory sounds.

Put A Face In Your Book


Camp With The Band

Posted by Nerve Salad at 8:02 AM No comments: