Hair Of The Dog - This World Turns 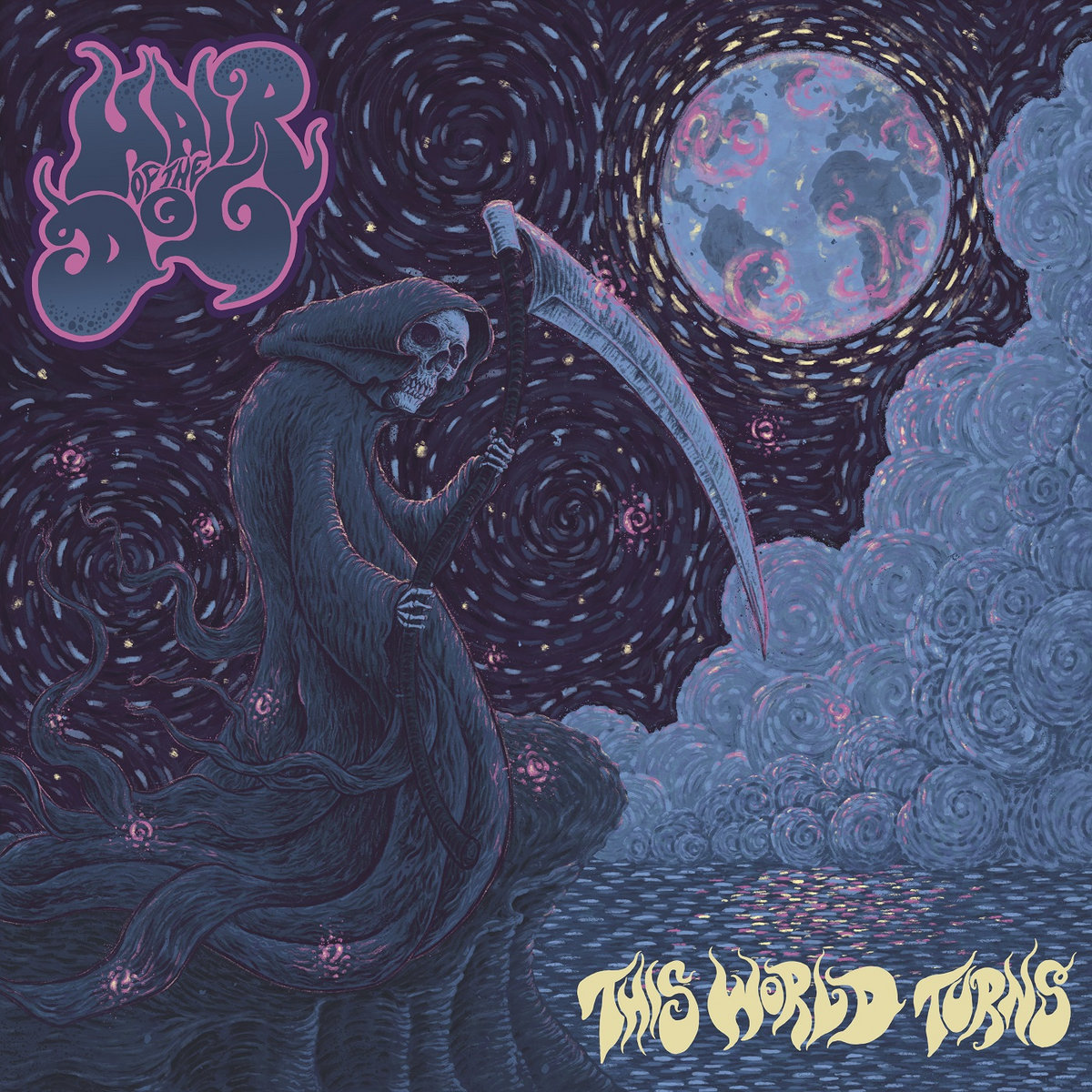 Certain bands simply stop by the house and hang out for a bit.

Other bands set up camp in the living room, follow you to work, join you for dinner, and hang out with you during road trips.
Hair Of The Dog is one of those bands that makes an impression on your life within 30 seconds of a song.
They've exploded like an atomic bomb and sent sharp, melodious shrapnel everywhere. I'm still picking pieces of awesomeness from places I didn't even know I had.

A recent discovery, but they've already got some miles with me. Thanks for the vacation soundtrack!

Hair Of The Dog's trajectory begins in Scotland. Three gentlemen churning away at their instruments with the fury of a very proficient army. With two awesome albums under their belt ("Hair Of The Dog", and "The Siren's Song", both of which are riff-heavy, 70s classic rock-meets modern stoner rock, with a touch of alt-rock), they've completely outdone themselves with "This World Turns".
It's an album they worked on. They really worked at this one. After listening to their previous albums, you can tell that they had some new experiences in their life when going in to create this one. It's deep on a few levels.
Beginning with the title track, we'll find that there is no escape from the initial blast. It seriously hammers down with riffs so heavy, you'll break a sweat. A pummeling tune with riffs that get a choke hold on you and box away at your ears.
"Keeping Watch Over The Night" comes in instantly following the previous track in such a way that it blends seamlessly.
"Ctrl-Alt-Delete" shows a little thrash influence mixed in with their stoner grooves.
"The Colors In Her Skin" is a serious heavy hitter. This song will probably make you climb walls.
"In Death's Hands" is a hard rock ballad with panache, which leads into:
"4AM", the first stoner rock song that I got a little misty over. I've played this one for my wife, and she agrees that it's truly a heartfelt song. Many of us stoner rock dudes can relate to the subject matter of the tune.

"This World Turns" is a pretty heavy album.. watch yourself. Before you know it, you could be picking out bits of sharp, hooky hard rock, and absorbing melodic heavy metal into your bloodstream. The best way to avoid the aftermath is to simply play it again.

Posted by Nerve Salad at 7:53 AM No comments: 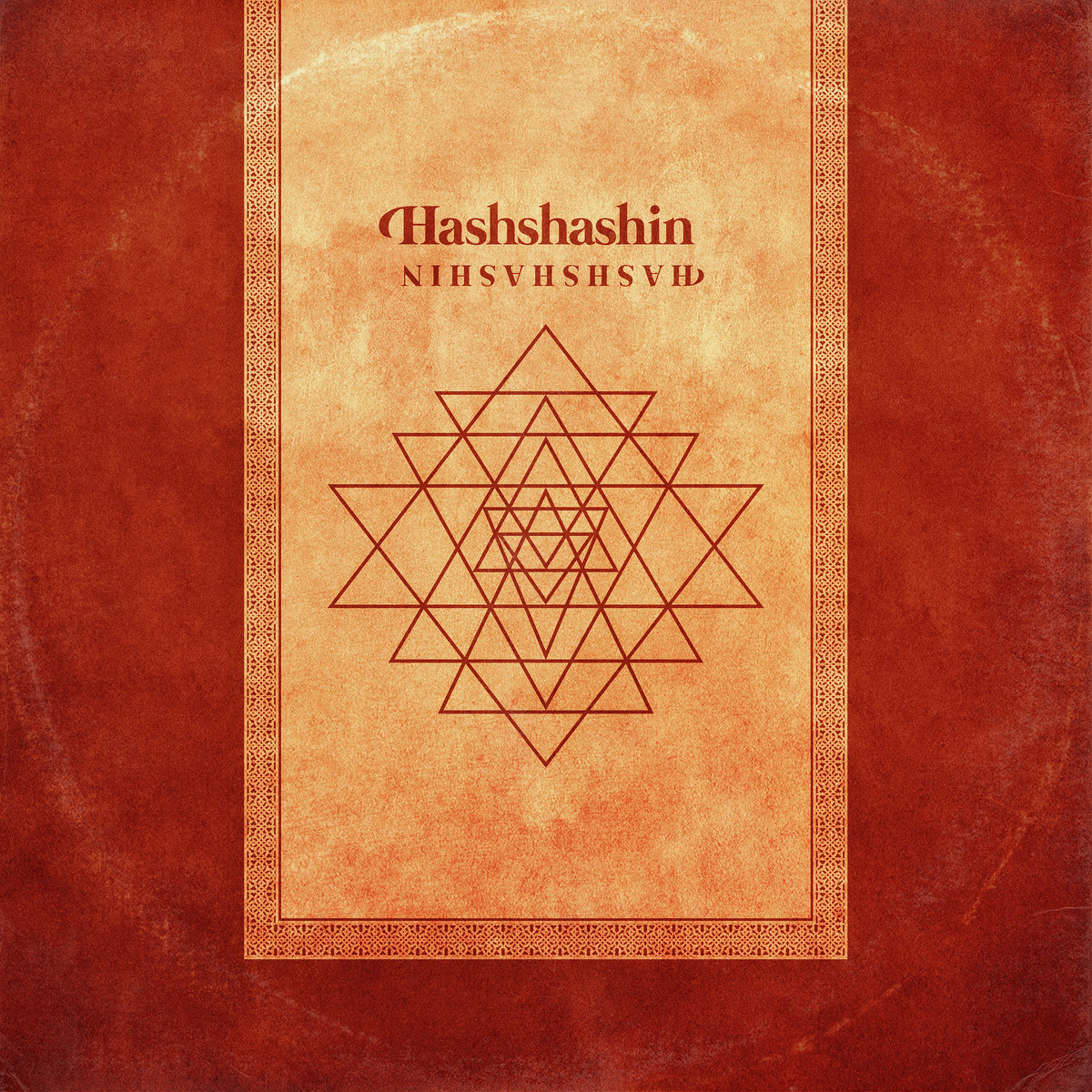 Australia's Hashshashin come out throwing sand everywhere. Glowing drone sand. The kind of sand you could wash your car with. And probably should.
Hashshashin is:
Evan McGregor - drums, percussion, didgeridoo
Cameron Macdonald - bass
Lachlan R. Dale - bouzouki, guitar, field recordings" (and Art As Catharsis guru)
Made up of members of Squat Club, Serious Beak, Five Star Prison Cell and Adrift for Days, these guys mean bizznizz. Already getting comparisons to Secret Chiefs 3, I's say that gives them a pretty good start.So for fans of SC3, OM, Consider The Source, and other Middle Eastern-inspired experimental prog, this is probably the thing you've been looking for.

I get really thirsty when I listen to this album. Should come with a warning: "Do Not Listen With Less Than 12 Ounces Of Hydrating Liquids". Also remember to brush the sand out of your hookah before use. PSAs aside, what we have here is heavy proggy experiments with Eastern-ish melodies, and occasionally crossing vast deserts to seek other tonal and rhythmic influences. A jewel.

Books Of Faces
Posted by Nerve Salad at 12:41 PM No comments: 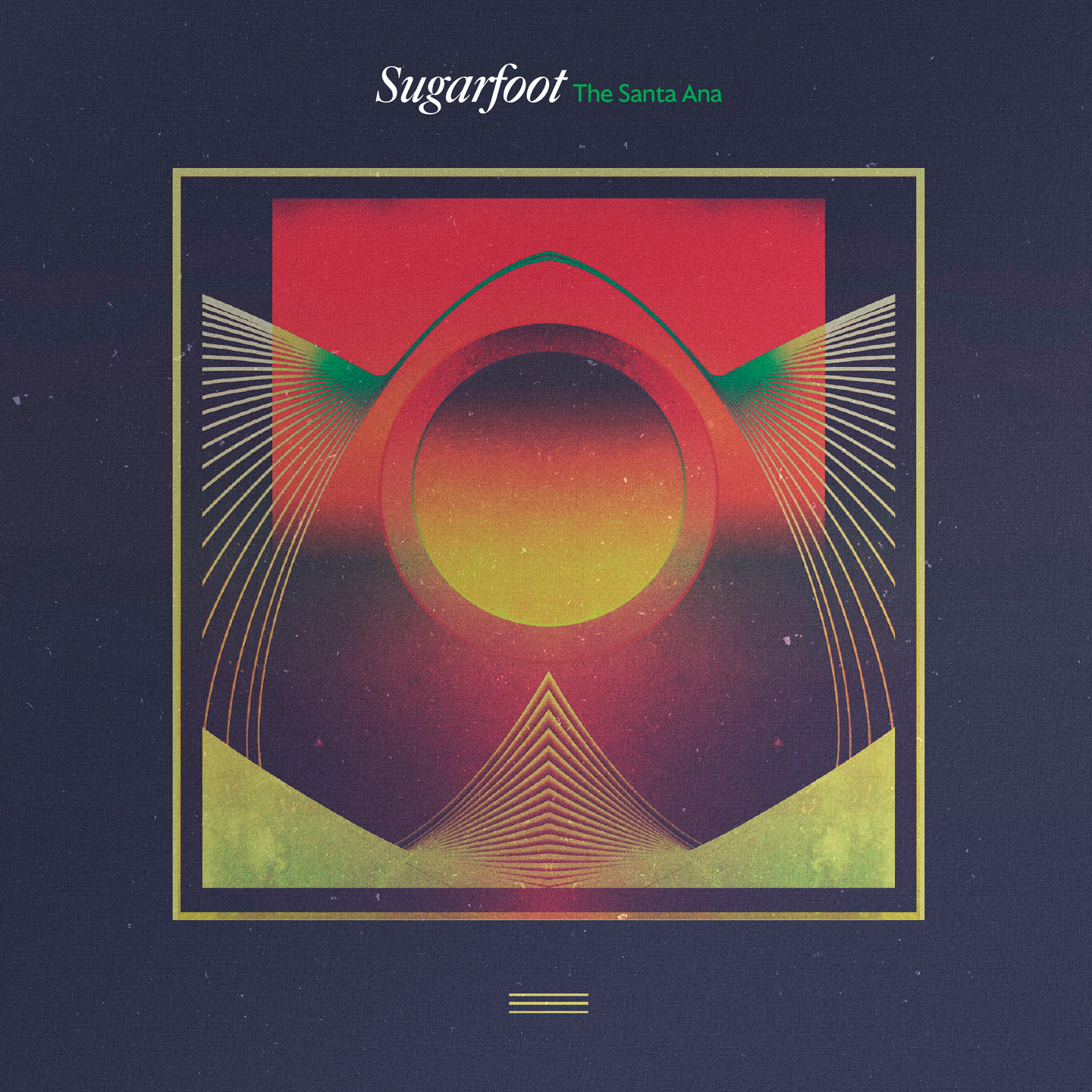 Let me start by saying that this album is one I have listened to more than any other album this year, or the past three years. I love it that much. And I'm not really a country music fan at all. Southern Rock, yes, power pop, yes. Psych rock, yeah. Country, nah...
But as of June 2017, this is the Top Album Of The Year.
Sugarfoot are from Norway... made up of members of Motorpsycho, The Pink Moon, Deleted Waveform Gatherings, Too Far Gone, and a bunch of other prominent bands. It's a different world out there, that's for sure. As such, we figure that this would mean we are all stuck in our little musical holes, separated by endless miles of ocean. 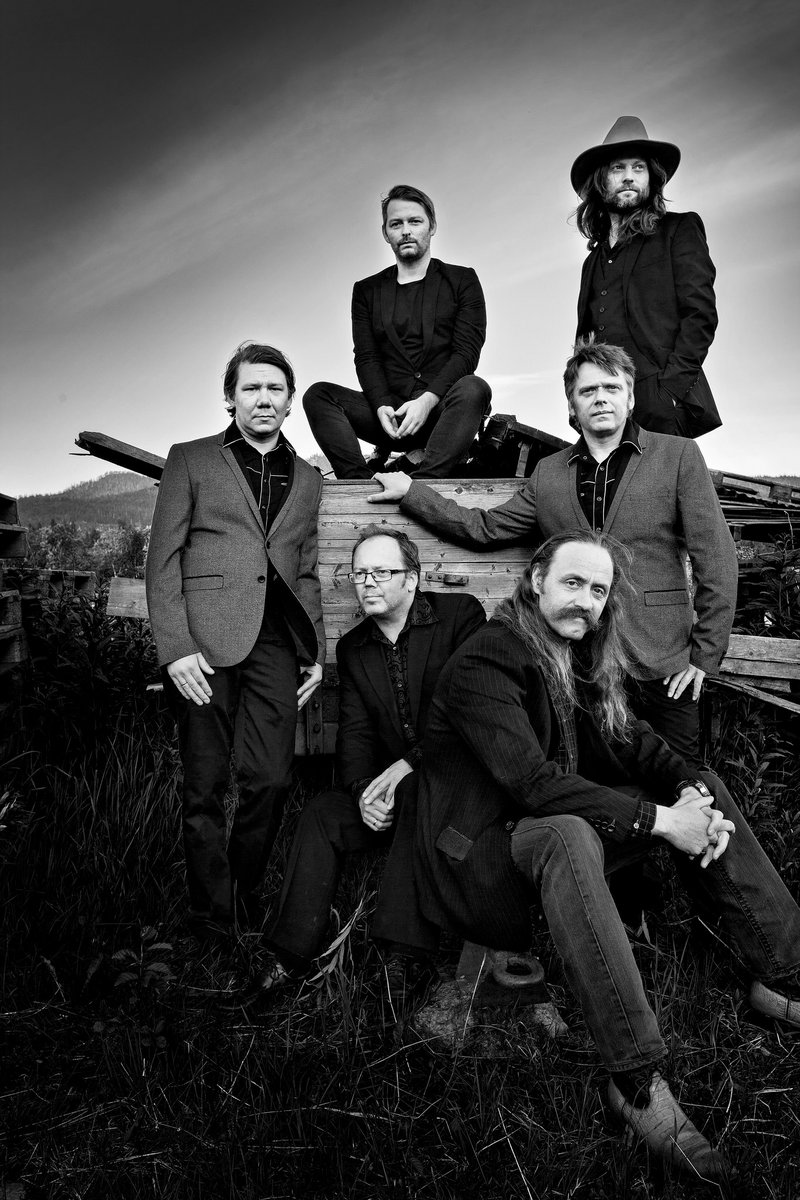 This just isn't the case with Sugarfoot. They traveled a long way to record their latest album. From Trondheim, Norway to Joshua Tree. 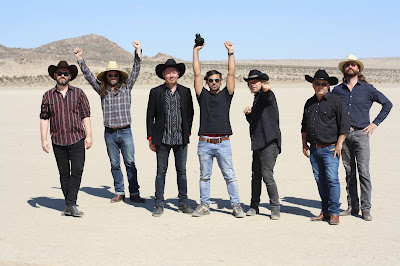 This seems to help them capture a certain sound. They take one look at a rattlesnake, one glance at a Saguaro, lift up some rocks to discover a few scorpions, and they divvy up their sound accordingly.
The pedal steel runs the show, but the songwriting and musicianship are the kings.

The album begins with "The Nightingale", which is honestly a psychedelic rock tune. A little CSN&Y, a little Yes, a little America, a little Tonight's-The-Night-esque Neil Young. Hooks that kill. "All Dried Up", a song about smoothing out the edges of loneliness, is yet another psych rock/alt-country tune, and one of my favorites on the album. "A Repossessed Blues" comes in complaining about the heat with a fun rhythm, awesome lyrics, and a great chorus. "A Hungry Man" is the album's single, and it's a strong one. "Schmogne" might be the one song I can't get out of my head for more than a minute. A song obviously inspired by their trip to the USA, they sing about being on an airplane and seeing where it takes them. A super country-ish track that stands out lyrically. "My Buzzing Telephone" has this vibe I can only describe as Midlake-meets-The Smiths, its minor-keyed lamentations of old flames and broken promises...
"Blisters On My Mind", about settling down with a "good one", is a power pop-influenced ditty and jumps in throwing a few uplifting melodic uppercuts into the previously-established moodiness. "Already Counting" begs the question: 'Where did it all go wrong?' while a fading loved one watches his family fight over his "stuff". Picking up the pace is "Coastal Postcard", a rockin' Southern-inspired tune about minding one's own business and having one's own fun, with some real honky tonk hammering. "Snakes And Ladders" is an ode to lost loves and and regaining one's soul back. "A Cog In Your Wheel" tosses a few Neil Young-y grooves and blue collar romance. "Mighty Pharaoh" gives us a little Doors groove, and a few trippy psych rock glances. The album finishes off with the title track "The Santa Ana (Hats Off To Shakey)", the longest song on the album. At 15 minutes, you would think that it would take a while to get through... when this album is over, you'll play it again to let it all sink in even more.

Sugarfoot... what we have is a band that has looked towards American music and interpreted it in such a way that it comes off as something completely different and new. It's not country music, but you could set a few tunes in front of your country pals, and they would be into it (if they have taste). It's not rock music, but you could easily play these tunes in a setting that requires rock tunes. It's not power pop, but you would be crazy to think that there are no influences there. It's not Southern Rock, but you might as well put this in your mix. What we have are odes to blue collars, green collars, and music. Can you listen to this while plowing the fields? Absolutely. Can you listen to this while commuting to the bank? Sure. Can the coal miners listen to this? Of course. There's some James Gang, some Eagles, some 70s psych, and some down-home folk music, maybe even a little early Wilco, probably some CS&N.... you can truly pick out each and every proper influence but still never put your finger on an overall sound.
Sugarfoot released this album, and they became one of my favorite things to come out of Norway in recent years (including Orango, who single-handedly took Southern Rock and made it into a completely new and amazing thing... Norway knows). There is real musicianship here. These guys take their sound seriously.

Just one more thing:
I'm an American. I have Norwegian roots. Rich ones. My whole family is made up of Scandinavians, with one Icelandic exception. My grandfather was a true Nordic countryman. I can't speak Norwegian at all.. I can only read or hear it and translate it slowly. I pride myself in my English from time to time. I like to play with words like toys. English words. That's all I know. When I hear Sugarfoot's lyrics, I get a little envious. How is it that Norwegians have such a poetic grasp on the English language, better than the slangy nonsense spoken in my own homeland? In other words, the music is great, but those are some good lyrics, too. Lyrics that are better than any other American country music lyrics I've heard. Not to mention, these are songs that are actually written by the people that perform them.
Sugarfoot's "The Santa Ana" is in my list of favorite albums ever...
Upon discovery, you might find it necessary to pick up the other Sugarfoot albums:
- "This Love That We Outwore"
- "Big Sky Country"
- "Different Stars"

Buy A Copy Here
And Here!
Posted by Nerve Salad at 7:02 AM No comments: